One of construction’s most iconic technological advances came with the introduction of Building Information Modeling (BIM). For the first time, building owners and facility managers could see what their new building would physically look like and contractors could check for any coordination issues prior to actual construction. As that technology progressed, another dimension was added – time – raising the bar even further.

Adding time to models allowed the viewer to experience the construction of the entire facility before driving a single pile. Unlike the previous models, they weren’t so static. While different elements “fell” into place in succession, there was only an abstract sense of time. Now, the model physically builds itself according to the determined construction scheduled. This ultimately creates a more interactive experience for client review, architects and the contractor teams, on top of developing a better understanding of job flow.

While the possibilities for utilizing 4D scheduling are endless, there is one use in particular that has captured the interest of construction managers, public entities, and OSHA alike.

Breaking the model down stage-by-stage, Robins & Morton began identifying the impact of construction on life safety of the patients, the existing nearby surgery unit, radiology and the NICU departments. Another challenge included maintaining five emergency egresses, winding through the construction zone, throughout the project’s duration 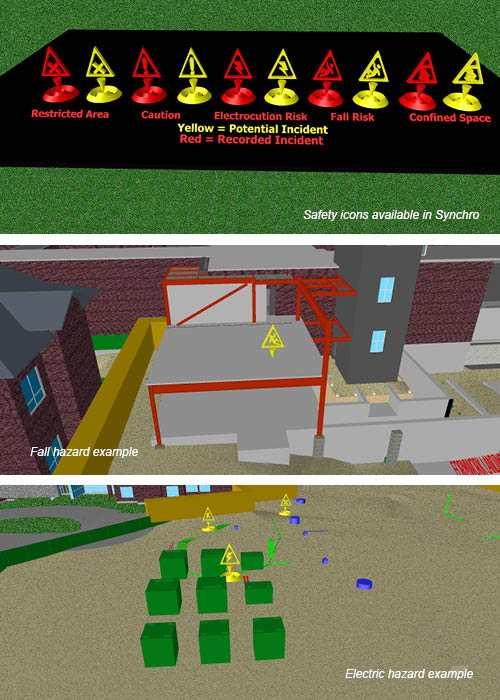 While walking through each stage of construction within the model, the team used safety icons to identify key areas with potential safety hazards. By diligently marking these areas within the 4D Scheduling Software, Synchro, the team could easily perform a pre-work hazard analysis report before commencing given tasks.

In addition to being a useful tool for the construction management team, the trade contractors have also been given access and training on how to fully utilize the technology in both the field and office. As a result, it is often used during pre-task planning meetings, scheduling meetings, site logistics and coordination in the field.

It’s not surprising that safety was a priority when considering the many ways the team could use a 4D model, as the CHS NorthEast team is already an active member of the Occupational Safety and Health Administration’s SHARP Construction program, a designation from the North Carolina Department of Labor. This designation recognizes construction sector employers that exhibit superior leadership in occupational safety and health management. The program includes quarterly meetings and onsite inspections with OSHA to discuss progress and other safety-related topics. During one of those early meetings, the CHS team shared the 4D schedule and the safety functionality they implemented with the SHARP team. As a result, they have reached out to the Robins & Morton team to use the model as an OSHA “Center for Training.” The local fire department has also used the model for various training and fall rescue awareness scenarios.

Refusing to accept that a 4D model was limited in purpose led the team to ultimately utilizing it in an innovative capacity.