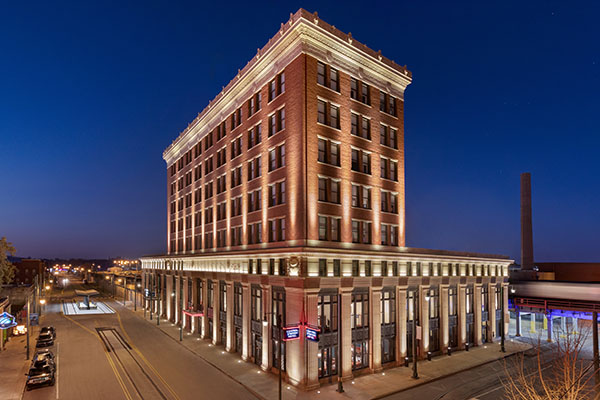 In April 2017, a small group of developers, architects, and construction managers gathered to walk through the deteriorating Central Station in downtown Memphis, Tennessee.

They planned to conduct a routine assessment of the existing condition of the 1914-era building – the first step in what would become a multi-phased restoration of the celebrated but long-neglected Station, transforming it into a full-service hotel.

However, it was anything but routine. David Green, Robins & Morton’s Commercial Division Manager, recalled the initial reaction to what the team saw that spring morning.

“We came away with a shared excitement for what this could be, mixed with a definite apprehension about what it would take to responsibly restore its historic character.”

Danny Bounds, Architect and Principal with the project’s lead design firm Bounds & Gillespie Architects, realized there were many more questions than answers at that early stage.

“I remember wondering, ‘How do we even begin to get our arms around it?’ and ‘How do we make it work as a hotel?’” Bounds said. “The public spaces of the building had all these different levels, with stairs and ramps connecting each of the parts. It had a big function room dropped into the middle, 30-foot ceilings, one working elevator, a tunnel underneath it, and some sections that were falling apart.”

On the plus side, many of the 106-year-old building’s unique features, finishes, and artifacts remained in place. These historic elements included a graceful brick and limestone exterior, a terra-cotta trim, intact upper-level windows, original marble floors, a grand staircase, and the Station waiting room’s original arrival and departure board.

The project also came with an unusual challenge for any building team. Central Station is home to a still-active Amtrak terminal where the legendary City of New Orleans line arrives and departs Memphis each day as it travels between Chicago and New Orleans. The restoration had to proceed safely within both a construction schedule and an intractable train schedule.

One Structure, Multiple Use Adaptations

The eight-story Memphis Central Station, referred to as Grand Central Station prior to 1944, opened on October 4, 1914. Then, it was a bustling rail station with upper-story offices for the Illinois Central Railroad. Later, it served as a Memphis Police Department precinct. More recently, wholesale modifications included converting the upper floors of the landmark building into small rental apartments.

“Because the building was significantly altered over the years by multiple renovations, the as-built plans we uncovered were all outdated,” said Chad Evans, project manager with Bounds & Gillespie Architects. “We learned that no one, not even the city’s building department, had accurate documentation of existing conditions. We started out with no idea what was behind the walls and above the ceilings.”

After completing selective demolition, the scale of the unknowns and potential roadblocks began to come into view.

“The beams and columns did not align, and the Station’s layout, structure, and building systems were challenging,” said Bounds.

The most significant unknown, according to Robins & Morton Assistant Project Manager, Matt Preisz, was whether a restoration and preservation mission was feasible.

“The materials and methods used during the 1914 construction severely limited the options for how we might restore the main structure,” he explained. “It was unconventional  ̶  much different than the traditional structure we expected to see with reinforced floors. Instead, the building support relied on a large, clay block and terra-cotta arch  ̶  similar to an arched bridge ̶   that held everything together.”

Robins & Morton, alongside the development group and the project team, dedicated a full year of preconstruction work to analyze options, understand the limitations, evaluate the opportunities, and resolve the list of unknowns.

“We were all inspired by the vision McLean Wilson had for creating a distinctively Memphis guest experience,” Green said.

Wilson, who led the Central Station development team, is a Memphis native and has been the driving force behind several renewal and reinvestment projects in the city.

To translate the owner’s vision into a workable building plan, the team merged their collective knowledge and past experiences with forensic investigation. By using 3D laser scanning technology, they were able to examine the entire building, revealing previously hidden conditions within the walls, ceilings, floors, beams, and structure. The scans defined the extent and location of issues needing remedial work, including missing or misplaced structural elements. In some places, such as the second-floor guest rooms, assumed locations of structural elements were off by as much as two feet.

To remedy these issues and other problems, the team adjusted the planned size and location of several guest rooms. To install new, essential items such as guest elevators and mechanical systems, while meeting life and safety code requirements, a series of surgical modifications were developed in collaboration with the National Park Service (NPS), the Tennessee Historical Commission (THC), and city inspectors.

Thorough investigation and preconstruction work provided the evidence needed to allow the rebuilding project to proceed as envisioned – an authentic preservation of the 1914 landmark.

Balancing Past and Present Needs

Simultaneous with the preconstruction phase, the work of documenting the building’s historical elements and preparing its preservation plans proceeded. The project’s historic preservation consultant, Tony Bologna, led the effort to comply with and, when needed, negotiate, the state and federal requirements in place for commercial projects receiving preservation tax credits. The NPS and THC each had a role in overseeing the Central Station renovation work to ensure it met the Standards for Rehabilitation set by the U.S. Secretary of the Interior.

Bologna described it as a “meticulous process” requiring project teams to balance modern code requirements, technology integration, and energy use while preserving as much of the original building as possible.

“Teamwork and problem solving are critical to succeeding with these complex projects,” said Bologna, a specialist with 30 years of experience in preservation initiatives. “The Central Station building team members understood the need for patience and flexibility as we all worked to integrate the recommendations, requirements, and approval times that are part of the process.”

One example of how meticulous the balancing can be is the restoration of the Station’s former waiting room into a 21st Century ballroom. Fortunately, the original terrazzo floor and period ceiling remained intact, but these surfaces created a big challenge.

“We discovered that the acoustics in the ballroom were dreadful,” Bologna said. “It was impossible to have a normal conversation, even with a person sitting right next to you. We needed to solve that problem without diminishing the historic integrity of the space,” he said.

To resolve the issue, the team received approvals to partially carpet the room and add an acoustic plaster material, matched in color and texture, to the ceiling. These remedies significantly reduced the sound problems. 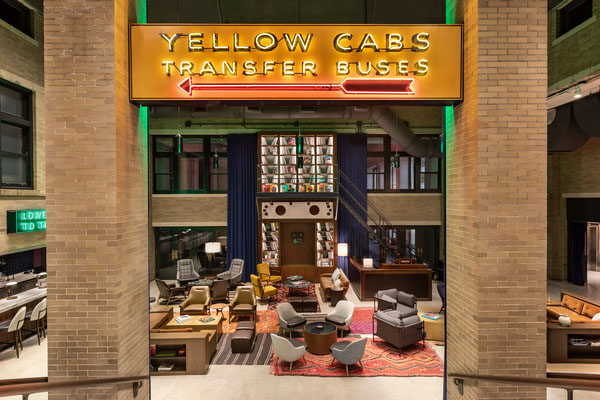 In other high-visibility locations, the team relied on research and photographic evidence to make their case for needed modifications. At the street and lobby level, for example, a brick wall prevented views from the lobby out to the hotel’s new outdoor plaza. Bologna discovered an archival photograph that exhibiting the area’s original layout – without the wall. Based on this proof, both the THC and NPS approved a demolition that opened the space to the outdoors.
“We had a lot of good faith negotiations that allowed for creative and authentic solutions,” Bologna said.

Most of the preservation decisions had no need for negotiation. Iconic artifacts, long identified with the Station, and now beloved by hotel visitors, were cleaned, repaired, and given new life. These include the Station’s arrival and departure marquee, interior and exterior neon wayfinding signs, and an eye-catching iron stairway and platform. The stairway, repurposed and now in use in the hotel bar, allowed the conductors to reach the back of the arrival/departure marquee and change out time and track information by hand.

Memphis’ musical culture is celebrated in the hotel’s Eight & Sand bar and listening lounge. As guests enter, they see a lovingly curated, 30-foot high record wall containing over 500 vinyl LPs. DJs spin playlists for guests, and they live stream the music. In the guest rooms, the stream plays via custom-made, high-fidelity loudspeakers created for the hotel by Memphis-based sound system pioneers EgglestonWorks.

Original artwork appears throughout the public spaces. The works were created by local artists and by those who live and work along the 900-mile City of New Orleans train route. Guest rooms feature prints by Memphis photographer Jamie Harmon showcasing images taken along the Chicago to New Orleans journey.

Team Reflections on the Station’s Preservation

Asked to reflect on what is most rewarding about the preservation of Central Station, team members cited its importance to the community and their collective pride in the work.

“For me, it is the feeling I get when I walk into the lobby or the bar and see all types of people of all ages, a microcosm of our society, enjoying the space,” replied Bounds. “You can feel the vibe of the city and want to be a part of it. This lets me know that we were able to rise to the challenge collaboratively and create a special place.”

Green spoke of the team’s shared pride and enthusiasm. “Preserving and reconstructing a century-old building is a tremendous thrill for everyone involved. In many ways, the level of reward is so much higher for all of us because the challenges and risks were inherently high,” he stated. “To see how well it is received is very satisfying.”

Bologna recognized the team dynamic. “Our goal was to maintain as much of the original and historic elements as possible, and everyone on the team saw that commitment through, regardless of the challenges. This dedication only comes into full view when the project is done, and others can appreciate the authenticity of the preservation.”

The journey from their first walk-through to the grand opening of Central Station provided countless technical challenges and obstacles. The outcome, said McLean Wilson, Principal of Kemmons Wilson Companies, made the long journey worthwhile.

“Central Station is a testament to the city’s history and culture, and we are proud of the project team’s work to create a place that brings visitors and residents together in a true Memphian sensibility.”