While the completion of a new amenity can bring excitement to a community, it is preceded by the potential interruptions that come with construction, such as noise and traffic.

Although some actions must inevitably take place, construction teams can make the process easier on community members, project neighbors, and the client by prioritizing their comfort.

Senior Superintendent Mike Goodin knows a thing or two about keeping neighbors happy in the community and within the facilities where he builds. Goodin’s experience ranges from intricate interior renovations and complex medical campus additions to new builds on vacant sites. Although each project is different, he’s found that he can build a successful project while also being a good neighbor by maintaining a thoughtful approach in four areas: planning, building relationships, communication, and flexibility.

Most potential issues can be avoided in the planning stages by considering the concerns of neighbors and community members. Goodin takes note of what’s adjacent to the building site: Is it another business? A neighborhood? Or are client operations taking place on the other side of the wall or fence?

Goodin stresses the importance of carefully considering site logistics—the location of gates, fencing, and equipment, as well as the flow of vehicular and pedestrian traffic—before the project team arrives onsite. The goal is to minimize disruption to the surrounding area.

For occupied sites such as healthcare campuses, Goodin and his team strive to minimize interruptions from their activities and to maintain convenient pathways for patients, visitors and staff.

“One way to ensure that we’re being a good neighbor is to think of the project from the beginning through the perspective of the staff and neighbors,” Goodin said. “Imagining how others will experience the project helps us plan for, and alleviate, potential issues.”

For example, on the Atrium Heath Cabarrus Sanger Heart and Vascular Institute addition in Concord, North Carolina, the team’s concern for the occupants in the adjacent department led them to preemptively move the fresh air intakes of the hospital’s air handling units to an elevated location, avoiding the intrusion of dust, dirt and fumes.
For renovations and additions, Goodin and his teams think of barrier walls not just as a separation between occupied space and construction space, but also as an opportunity to dampen noise and block distractions so others won’t be disturbed by building activities.

A sure way to cause a disturbance is to accidentally cut utility service. Accurately identifying existing utility runs – including using ground-penetrating radar and other tools to validate existing plans and maps – can prevent unplanned interruptions. 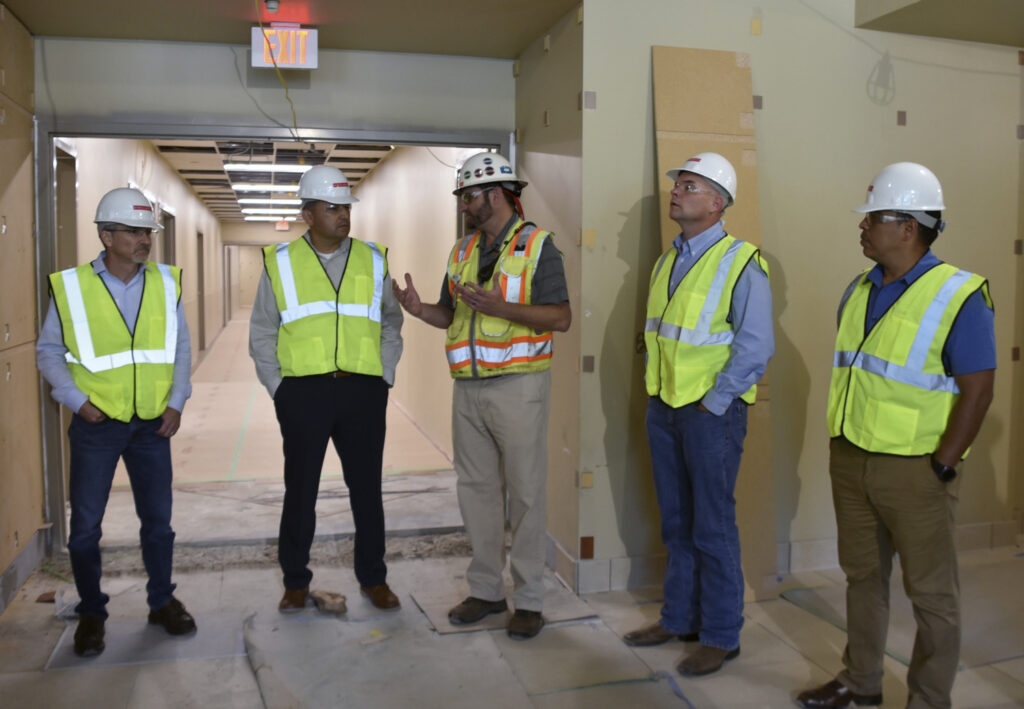 Goodin starts each project by considering this question: “What is the most efficient way to flow construction and finish the building as quickly as possible with minimal interruptions?” Answering that question includes getting to know the people who will be most affected by the construction.

Depending upon the project, the Robins & Morton team meets with user groups and the architect to determine if construction should be phased to further minimize operational impact.

That same concern for construction’s impact on others’ work extends to Goodin’s approach with the business community: he learns their priorities to develop ways to make the project as non-intrusive to their operations as possible. Then he makes sure to be accessible, keep lines of communication open, build the relationship, and ask for feedback. Business owners have enough to do with managing their own operations, so if construction teams can improve community relations during the building process, it makes them more desirable partners. Building relationships with local government, including authorities having jurisdiction (AHJ) such as inspectors, is also important. According to Goodin, it’s never too early to engage them, and that early engagement can prove especially beneficial with inspectors. If contractors involve them too late, there could be changes to the scope of work needed for code compliance.

To Goodin, the best route to alleviating neighbors’ concerns is simple: talk to them.

“When neighbors feel they’re being considered, they feel as if they’re part of the project,” Goodin said. “When they’re aware of upcoming activities or understand the purpose of a sequence of events, sometimes potentially bothersome activities can go on without issues.”

For example, when a neighbor at Goodin’s current project at Novant Health Ballantyne voiced concern about early morning equipment noise, Goodin invited her for a tour of the site. While she was there, he explained the building plan and they discussed the times construction might be most noticeable. Not only did she enjoy learning about the building process, but she shared that knowledge, creating goodwill with others in the neighborhood. Goodin takes the same approach to communicating with facility staff. For example, hospital additions and renovations often take place beside departments whose members could be disturbed by the activities.

At the Atrium Health Cabarrus Sanger Heart & Vascular Institute, the addition affected three sides of an existing hospital. Goodin visited staff members to familiarize them with what to expect during the project. He exchanged phone numbers with staff, inviting them to call with their concerns. Whenever they did, he responded promptly, adjusting operations to alleviate issues. As a result, everyone treated each other as part of the same team.

Likewise, while renovating the occupied Mariam Cannon Hayes Women’s Center wing of Atrium Health Cabarrus, Goodin’s project team held weekly meetings with staff to learn about their concerns, let them know what to expect, and address their questions.

Flexibility is essential to maintaining good relationships. Although project teams meet with user groups to explain the project, it’s impossible to visualize all activities and their impacts in advance. For this reason, it’s important for construction managers to check in with stakeholders regularly and be willing to adjust operations when feasible.

One example involves using quieter tools to execute especially noisy work. For instance, cutting metal ductwork with a reciprocating saw is loud and can be disruptive to adjacent departments in an occupied facility. Alternatively, teams can use much quieter metal shears. The use of shears takes longer, but it’s a welcome reprieve from noisy activity and with proper planning, it doesn’t impact schedule.

Another strategy is to plan off-hours work when possible, performing activities that produce vibration and excessive sound when it won’t impact staff performance.

Ultimately, construction is a schedule driven work, but to be a good neighbor empathy is key. If someone asks the construction team to shut down operations, we must consider that request and comply when possible. When bothersome activities can’t be rescheduled, Goodin provides advance notice, giving facility staff time to plan around the construction work.

While each project has its own unique combination of challenges and stakeholders, the keys to success are the same. “When construction managers employ a thoughtful approach and prioritize relationships, everyone wins,” said Goodin. “It’s the best way to ensure a successful project while also being a good neighbor.”