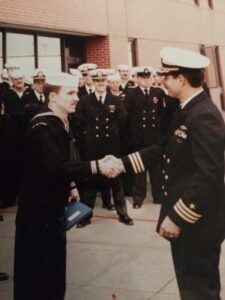 Culler grew up in a small town, and found the Navy’s promise of adventure to be too tempting to pass up. With an interest in the electrical side of Naval service, Culler enlisted in the Nuclear Power Program where he studied to be an electrician for two years. Upon completing the program, he was then whisked away to South Carolina on his first assignment.

By the time Chief Petty Officer Culler completed his service nine years later, he had been responsible for running the electrical division on a nuclear-powered submarine as well as teaching at the Nuclear Field A School. His return to civilian life organically led him to construction because of his expertise in the electrical trade.

Although his primary gain was the mastery of a skilled trade, Culler also believes that the military taught him self-motivation, time management and attention to detail that help him to perform at a higher level than he could have without his military training.

Culler began his career with Robins & Morton as an Electrical Preconstruction Manager, but two years ago he founded the company’s low voltage self-perform group. His time is now dedicated to the growth of the low voltage group and the pursuit of work within the company.

Culler lives in Sanford, Florida, with his wife, Sharon. In his time off, he enjoys traveling, and planning trips to see his son, daughter-in-law and four-year-old grandson in Asheville, North Carolina