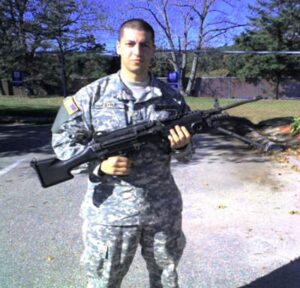 For a young Daniel Soliman, his enlistment in the Army was originally a way to straighten his path. Between hanging out with questionable friends and indifference toward his academic performance, he looked to the military to provide much needed structure. In return, he would provide six years of loyal service as an infantryman, being honorably discharged as a Staff Sergeant.

During his enlistment, he learned about selflessness and working as a team. Infantrymen are often described as those who are the first into battle, and the last ones out. These endeavors required discipline, tenacity, working with others from all walks of life, and the ability to discern when to lead and when to follow.

Soliman’s time in the military fundamentally inspired his now-career in construction. He realized that he enjoyed working in a team environment, enjoyed the opportunity to be outside and liked that there was always a change of scenery. All of these aspects paralleled nicely with a career in construction, and Soliman believes that the values instilled in soldiers would serve any individual, team, or company well.

Today, Soliman lives in Durham, North Carolina, working as a Senior Scheduler, supporting various projects in maintaining their schedules and identifying potential road blocks to progress before they happen. In his free time, Fahmi enjoys running, golfing and spending time with his wife.