This year,  Lean Construction Institute’s 21st annual Lean Congress rolled out a new feature – Live Labs. In the past, traditional Lean Labs were intended to teach the concept of a Lean tool, but there was a gap between theory and practical application. The Live Lab concept takes the traditional Lean Lab a step further, still teaching the concept, but also showing the tool in action through a live demonstration.

Robins & Morton, sheet metal contractor TechAir and a few volunteers had the opportunity to teach and demonstrate a live Quality at the Source meeting at Congress this year. In addition to teaching the how behind the tool, the group also shared the process they collectively developed as a result, dubbed the Quality Management Program. Through working on several consecutive projects together, both Robins & Morton and TechAir built a comprehensive and replicable plan to help each trade manage quality, reducing re-work and boosting production. 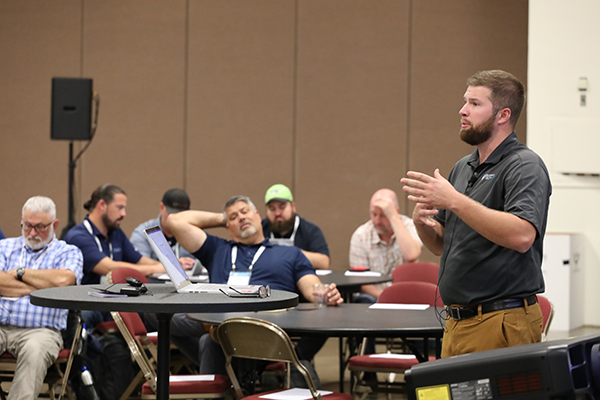 Like Lean teaches, the group reinforced that Quality at the Source’s primary intent is to make quality a proactive process instead of a reactive one. By ensuring each craft professional understands the task at hand before execution, it makes sense that there will be fewer mistakes and a greater overall understanding of what needs to be accomplished. It also creates an environment of learning, teaching everyone that mistakes are okay as long as we are using them to grow.

Immediately thereafter, TechAir was able to share their perspective as to why Quality at the Source was so valuable to their teams. Superintendent Chris Leblanc shared that participating in Quality at the Source meetings better connects workers to the project, giving those who put the work in place a platform to share their ideas for improvement. He also pointed out that without these meetings, craft professionals may not actually get to know others outside of their immediate team. Quality at the Source better connects them to a more expansive onsite network, ultimately empowering them to feel ownership of the project.

Elements of a Quality at the Source Meeting

Robins & Morton and TechAir walked through the elements of a Quality at the Source meeting: the agenda, the topic they’d be covering that day, details, and a note that this would be repeated as new tasks arose and new craft professionals arrived onsite. They also shared one of their own creations – a trade-specific field quality checklist originally piloted by TechAir and Robins & Morton that spread to other trades at the Medical University of South Carolina Shawn Jenkins Children’s Hospital and Pearl Tourville Women’s Pavilion project in Charleston, South Carolina. It garnered popularity throughout the jobsite for its clear, simple approach and ability to capture detailed information in a reduced format.

When the session concluded, the audience had several questions about implementing Quality at the Source and establishing a Quality Management Plan. Check them out here.

Q:  How do you capture all trades in this process and what is the value of that front-end meeting?

Robins & Morton Senior Superintendent, Bill Stevens: Since the Quality Management Program application is relatively new – only about three years old – we haven’t been able to quite measure that yet. Our goal moving forward is to continue to engage our project managers in helping us measure the value that we are creating in the field, but there is clear value in moving quality to the front of the process as opposed to “chipping to fit, patching to match.” Although we don’t have the actual cost of that, we are utilizing software right now to study the number of defects we have per square foot of building. On a 640,000-square-foot building, we had 42,000. On a previous 150,000-square-foot building, we had about 80,000. So, is that a direct correlation? Scientifically, we can’t prove that, but I think we can definitively say that our quality is getting much, much better. We only have two projects over this time period that we can draw data from, but yes, we expect our sheet metal superintendent to communicate with his craft workers the quality he expects. I don’t expect a Vanderbilt Engineer to quote the sheet metal specifications to the craft workers. I think that’s a mismatch of skills.

Robins & Morton Assistant Superintendent, Christena Holcombe: I will say, too, you have to get into the mindset that it is an orientation. So, congruent to your safety orientation or onboarding, it’s just what you do. Once you shift to that mindset, absolutely, it takes time. We sat through, how many Quality at the Source meetings? But you want to make sure that everyone onsite has the same experience. So, once you accept that, you can see the value when you talk to the craft workers and you can see the appreciation in their eyes. “Wow, you’re entrusting me with all this information? All these specifications?” They’ve never seen that before. Once you see the value [for yourself] it makes it all worth it.

Senior Superintendent, Bill Stevens: Doing some quick math, there may be ten people in a meeting and it may take an hour. That’s a six-minute investment per craftworker to communicate quality.

Q:  When preparing for a Quality at the Source meeting, where does the information come from? Do you rely on the designer? Or is it a collaborative effort?

TechAir Superintendent, Chris Leblanc: We, TechAir, put the packet together – specs, drawings, submittals and all that. We met with the owner and engineer separately, and they took the packet, marked it up with their corrections. We did a mock-up meeting with the engineer, to see how it flowed, and then he had some more corrections. So, it was a collaborative effort, but we built the packet, and he made the changes he felt were necessary.

Senior Superintendent, Bill Stevens: I think you’re right on the right track here. The farther we integrate design into quality process, the better off our output will be. A lot of our quality is the output of our team’s effort, not just these individuals.

Q:  Who developed the idea for the checklist? And who completes it?

Superintendent, Chris Leblanc: The people using the checklist are the people installing the work. The sheet metal journeymen mechanics installing in the air with the checklist. The checklist is not from a submittal – we built the checklist as a part of this packet, with engineer-based recommendations, then we installed the first section of duct work, we took the checklist over there the guys had been using, walked it to the engineer for a first-run study, and then modified it again. We continued to modify it over the course of the job, but it was never a formal submittal, it was an organic document.

Senior Superintendent, Bill Stevens: Something that we may not have highlighted enough is our first-run study. The first-run study is very important so that everyone has the understanding of quality expectations up front.

Q:  When do you schedule a Quality at the Source meeting? How far in advance of the work activities starting?

Senior Superintendent, Bill Stevens: It depends on the project. On a large co-located project, they would have an onboarding and a safety orientation – ideally, it’s before they go on the site – but, I would want them to do it at least in the first week they are they, so by that Friday.

Superintendent, Chris Leblanc: Yes, we try to get it done before they’re ever onsite, but what we did was, if we had two or three people start on the same day, we may not do it on that day, we may wait until we had a group of at least five people, sometimes up to 20, but we’d wait until we had a group. Not just one here or there, but at least once a week. Throughout the job, if we saw people who weren’t following protocol or meeting quality standards, we’d bring them in to retrain them.

Q:  How did you get craft buy-in on the check list?

Superintendent, Chris Leblanc: A lot of people didn’t like the checklist at first. They felt like it was somebody watching them, but then after a couple of weeks they’d call me and tell me how much it was actually helping them. They’d rather take the time to do it up front, than find things a few weeks later to fix.

Q:  How are companies participating?

Senior Superintendent, Bill Stevens: Our better trades take right to it, our lesser ones fight it. Yes, we’re putting it in our contracts, and it’s already in our specifications, so it’s not really anything that they’re not already required to do. They need to show us how they’re ensuring quality. But yes, it’s not always smooth, no question.

Q:  Did this evolve over several projects? Do you do this with other major partners?

TechAir Operations Manager, Kevin Robinson: I started working with Robins & Morton in 2010 or 2011 on a project in Maine. At that point, we had a checklist and thought we had a quality program but wasn’t until we got to punchlist items and we were having to have a lot of meetings because they were taking a lot of time. We had to talk a lot about, “what are we going to do?” because we had two guys on the fourth floor, fifth floor, sixth floor, fixing things and it was just eating up all of our time. So, we went to the next job, in Cherokee [North Carolina], this is when we went to Lean Congress in California and learned more about quality and we started working to do things more like that.

Assistant Superintendent, Christena Holcombe: I would say, too, that Tech Air has been instrumental in inspiring the other trade partners to follow suit. The project that they’re talking about, we actually had every single one of our contractors have a checklist, participate in Quality at the Source, regardless of scope. I’m an advocate that it doesn’t matter what you’re building, it has a specification associated with it and therefore it has something that you may not know that you could mess up, that you would have to fix later.

Senior Superintendent, Bill Stevens: We also have a weekly quality meeting, where all the trades get together and talk about what’s working and what’s not, so we’re all learning from each other. There are a lot of quality issues coming from that across trades, as quality isn’t isolated to just one trade, so we have to continue to figure out how to encourage those interactions, as well.