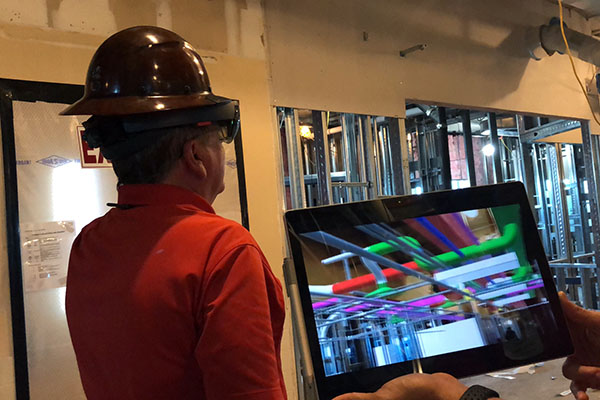 In small Beta batches across test applications, users began experiencing this new wave of VR immersion as their hands and fingers replaced traditional remotes. The initial reviews echoed similar sentiment – a feature with fantastic promise as users raved about the fact that they could actually see their “hands” in the virtual space. But like many newly-released elements, there are still some latency issues and bugs to be resolved.

While VR is often associated with gaming, and more recently with training simulators in the corporate world, it has also become a critical component to the planning, design and construction community.

With the rise of building information modeling (BIM)/virtual design and construction (VDC) in the last two decades, it’s now possible to “build” a facility in a virtual environment before the sitework even begins. As VR has become more commonplace, construction and design teams have been able to integrate the tech with modeling, allowing users to view their buildings from the inside – essentially, try it before you buy it. This gives building owners and users the freedom to make changes to design before it becomes costly, or even impossible, due to structural circumstances.

As the technology continues to become more refined, and augmented reality (AR) rises in popularity as a field tool for the visualization of integrated systems, what do these new immersive features mean for construction and design? Manager of Scheduling and Innovative Support, Steve Moore, takes both the long and short views of five key indicators we’re seeing today.

While there is no certainty in predicting the future, trends do point positively to sustainable growth in the utilization of various tech tools to offset the workforce challenges the construction industry continues to face. As the needs for the built environment continue to increase at a pace incomparable with the rate of hirable craft labor, the industry continues to turn to technology and innovation to make work faster, safer and more efficient to protect the resources available.