In 2021, the city of Birmingham, Alabama, is celebrating its 150-year anniversary.

City officials chose the theme “Built to Last” because of Birmingham’s resilience and its adaptation to change. A release shared by the city said, “Like the steel we were built on, we were built to last.”

Of the many businesses that have their roots in Birmingham, Birmingham-based construction firm Robins & Morton has been part of building the Magic City for the past 75 years, from the downtown to the suburbs. Established in 1946 as Robins Engineering, the firm got its start building an 800-square-foot filling station in the city’s East Lake neighborhood and completing the still-standing Cahaba Heights Hardware store.

Over the years, the business and its founder, metallurgical engineer Todd Robins, became known for integrity, commitment to quality and fair treatment of everyone involved in a project. It was Robins’ emphasis on satisfying clients that would solidify the company’s presence in Birmingham, as both a builder and as a company poised for a bright future.

In the early 1950s, the fledgling company got it first contract with the city through the newly formed Birmingham Water Works Board. In 1951, the city purchased the water system from a private operator and the acquisition was met with the immediate need to expand. Robins and his team were able to support the city by upgrading water facilities along the Cahaba River and Highway 280. This infrastructure expansion was critical for widespread access to clean water and influenced the city’s population growth in the 20th century.

Other well-known projects in the ‘50s included renovation work at the flagship Pizitz department store, as well as the construction of the building that would become the Episcopal Diocese of Alabama on 20th Street.

The following decade was filled with small but steady work. For example, Robins Engineering was responsible for building a series of Five-and-Dime stores. 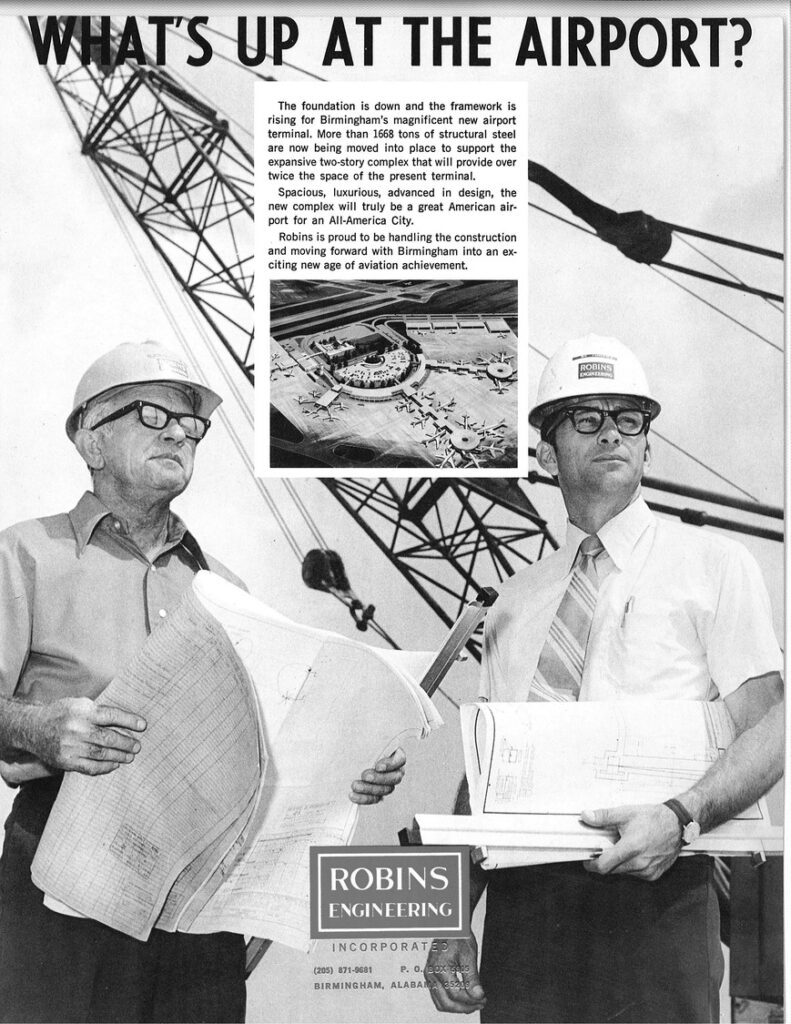 At the dawn of the ‘70s, Robins Engineering got a new name—The Robins Corporation—and a new, large municipal project from the city. With the increase in air travel, the Birmingham Airport needed an expansion, and the Robins Corporation took on the largest project in their history. Aside from the building’s size, the company also had to adapt to new materials, such as Kydex, to produce a look fit for the space age. With an innovative spirit that continues to define the organization today, the company completed the expansion on time and within budget.

That success elevated The Robins Corporation to a higher tier of construction company—one capable of competing for large work and managing the many challenges that came along with size and urgency.

However, in 1973, the most severe recession since World War II struck the nation, and Birmingham was not immune. As the country recovered in the late ‘70s, The Robins Corporation weathered the storm by taking on a significant number of local school renovations. These included Phillips High School, Harper, Huffman, Homewood and Mountain Brook. For many years, Robins served as a go-to source for school renovation work.

Before the close of the decade, The Robins Corporation also took on a project at downtown landmark, Legion Field, upgrading the seating capacity in 1977. Over the years, Legion Field hosted various sporting events for the University of Alabama at Birmingham, Alabama A&M University, and Howard College, now known as Samford University. For most of the 20th century, it was also the site of the Iron Bowl, the annual collegiate football showdown between archrivals Auburn University and the University of Alabama.

The early ‘80s marked a significant partnership with a new healthcare client and a shift in the company’s primary focus. However, while the Robins Corporation gained traction in the healthcare sector, they continued their efforts closer to home in the mid- to late-‘80s.

One such project included construction of the Birmingham Turf Club in 1986, now known as the Birmingham Race Course. Its original purpose was to serve as a live venue for thoroughbred horse racing and to raise the profile of Birmingham-area entertainment. Although the Turf Club went through several transitions in the following years, its conception was the result of a budding city’s desire to grow economically and in prominence.

Another example of economic growth in the entertainment sector came in 1989 when The Robins Corporation was tapped to manage the construction of a 640,000-square-foot exhibition hall, product mart, hotel and parking deck for the Birmingham Jefferson Civic Center (BJCC) authority. The project took three years, and required oversight of 15 general contractors, four architects and three interior designers. The project’s contract value upon completion was $123 million, or the equivalent of nearly $320 million in 2021.

Construction of the BJCC addition carried into the early ‘90s, overlapping with the construction of nearby Alabama Sports Hall of Fame and the Southeastern Conference (SEC) Headquarters, both of which completed in 1991. Only one year later, The Robins Corporation would earn its new name, Robins & Morton, officially recognizing long-time team member and executive Barry Morton as the majority shareholder in a successful generational transition of the business. 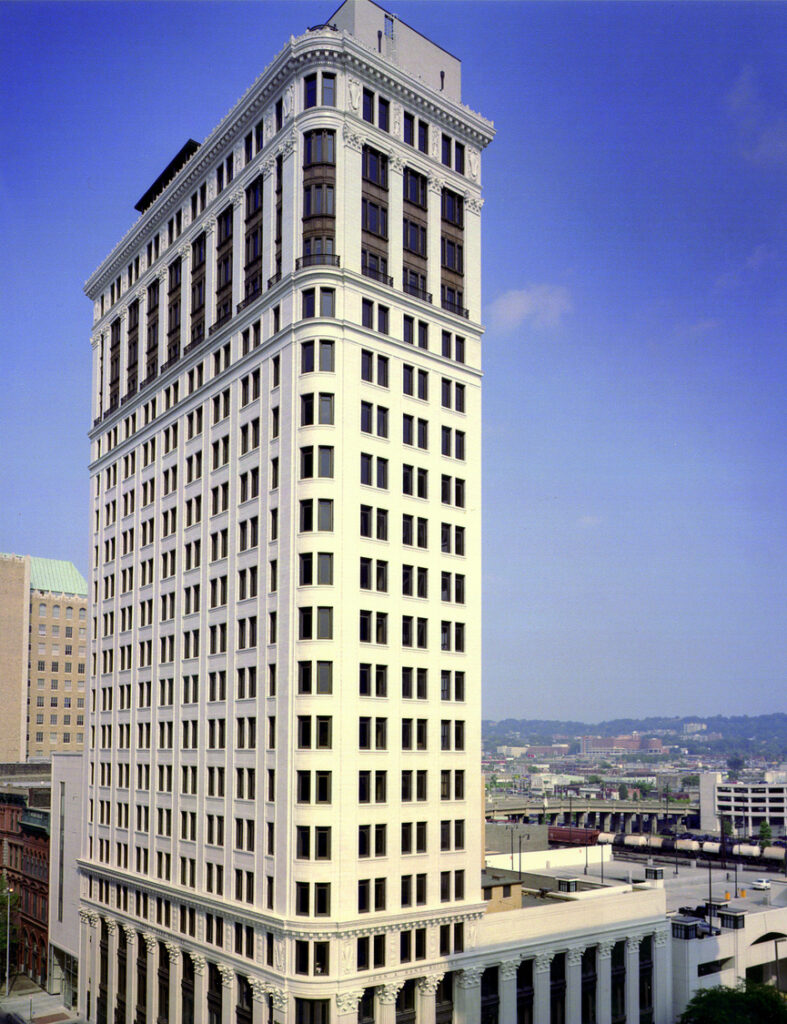 At the close of the ‘90s and into the early stages of the millennium, Robins & Morton worked on several improvements to what was once the tallest building in Alabama: The 20-story John Hand building. Built in 1912, the building was originally called the American Trust & Savings Bank Building, with its roots in the banking sector. It earned its more modern name in the ‘70s, after the president of First National Bank of Birmingham, who came to occupy the building in the ‘40s. In 1997, the building was purchased and a string of renovations began. Robins & Morton had a hand in a parking deck; the two-floor, athletic club buildout; tenant buildouts; and upgrades to the building mechanical, electrical and plumbing (MEP) infrastructure.

By the early 2000s, Robins & Morton was expanding rapidly throughout the Southeast and into Texas. Aside from the headquarters in Birmingham, the first of the firm’s locations was in Nashville in 1981. It would be 18 years before the company expanded again, this time to Orlando, but the turn of the millennium signaled rapid growth for Robins & Morton. In 2003, the firm opened its Dallas office; followed by Charlotte in 2007; and Huntsville in 2007.

By this time, Robins & Morton had become a national leader in healthcare construction, ranking among the top 10 general contractors in Modern Healthcare magazine each year. While the company’s healthcare work continued to grow, its next expansion was within the Birmingham office. In 2009, Robins & Morton established a new Commercial division, dedicated to the service of clients who needed Class A office, hospitality, or education buildings, among others. This led to a number of important economic projects beginning in the 2010s, continuing today. 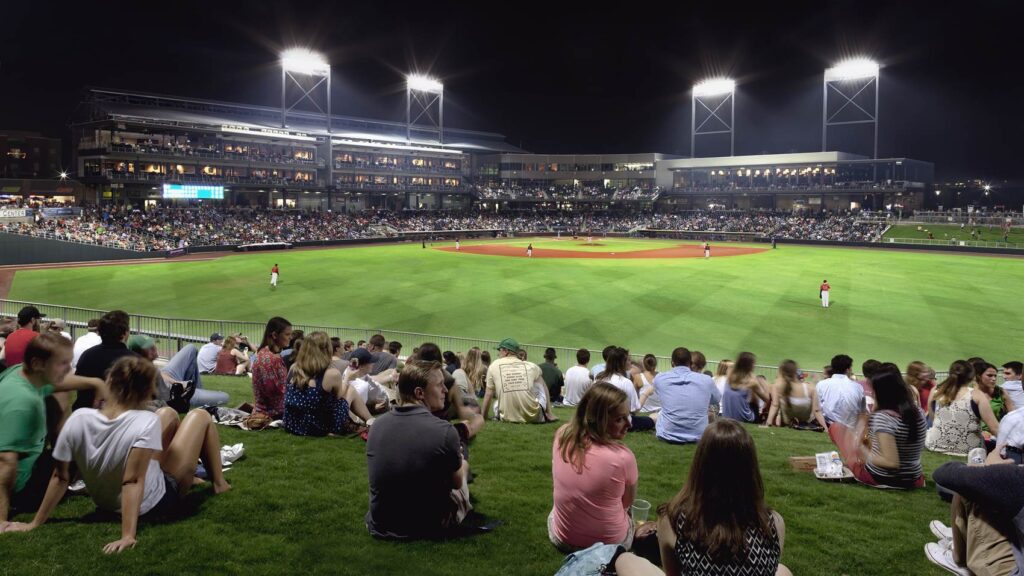 One such project was to build Regions Field, the home of the Birmingham Barons, in 2013. The 8,500-seat stadium, with a family fun park and picnic area, was a key project in the revitalization of the Parkside neighborhood along 1st Avenue.

Subsequently, Robins & Morton’s Commercial division completed several projects that brought a significant number of jobs to the Birmingham area. These include T-Mobile’s Customer Care Center completed in 2014, which hired 350 employees by 2015, and Oxford Pharmaceuticals completed in 2016 and is projected to have 200 employees by 2026. Other luxury hotels such as the Grand Bohemian Hotel, completed in 2015, and the recently completed Valley Hotel, add to the firm’s resume of tourism-promoting contributions to the city.

In 2021, Robins & Morton also began renovating the Birmingham Building Trades Towers—a multi-family apartment building that they first constructed in 1970. Once complete, it will provide sensibly-price studio and one-bedroom apartments in the Five Points South neighborhood.

Since 2007, Robins & Morton has added three new office locations in Miami (2015), San Antonio (2020) and Tampa (2021). Despite geographic expansion, the company also sank its roots even deeper into the red, Alabama clay in 2021. Robins & Morton recently completed an expansion and renovation of their headquarters,  and parking deck, reinforcing the company’s commitment to remain Birmingham-based.

Taking a second look at the cityscape, we’re reminded that its structures have names and stories, etched into history alongside the hands that helped build them. For half of Birmingham’s history, Robins & Morton has played a role in building the city from the ground up; assuring its legacy is built to last.